In 2020, the U.S. Southeast Atlantic and Gulf Coast regions saw an increase of over 400 to 1,100 percent, respectively, in high tide flooding days compared to the year 2000. 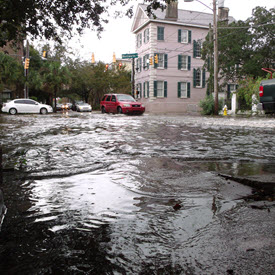 The U.S. annual high tide flooding frequency is more than twice that in the year 2000 due to rising relative sea levels. By 2030, the national median frequency rate is likely to increase by two to three times (seven to 15 days).

By 2050, high tide flooding is likely to occur between 25 and 75 days per year, depending on location.

Assessed over several decades, the national trend in high tide flooding frequency is accelerating, and is more than twice as likely now as it was in 2000. The rapid growth is in response to relative sea level rise, which is occurring along most U.S. coastlines. In 2020, relative sea level along coastlines reached the second highest level on record—0.3 meters (one foot) relative to 1920 levels.

The national annual high tide flooding frequency reached four days (median value) in 2020, equaling the previous year and just shy of the record of five days set in 2018. High tide flooding is now accelerating at 80 percent of NOAA tide gauge locations along the East and Gulf Coasts, with nearly all other locations rising, but not yet accelerating.

Compared to high tide flooding frequencies typical in 2000, 2020 was extraordinary. Flood days occurred 100 to 150 percent more frequently than in 2000 along the Northeast Atlantic and Eastern Gulf coastlines. Even higher percentage increases (more than 400 percent) occurred along the Southeast Atlantic (for example, more than a 400 percent increase in Charleston, South Carolina, with 14 days in 2020, compared to about two days in 2000). Percentage increases compared to 2000 were the greatest in the Western Gulf (more than 1,100 percent, or 22 days) in Bay Waveland, Mississippi.

High tide flooding in 2020 was most prevalent along the Western Gulf, Eastern Gulf, and Southeast Atlantic coasts (17 days, nine days, and eight days—median values, respectively), with 14 locations breaking or tying historical high tide flooding records due to a combination of effects from a record-breaking hurricane season and rising sea levels.

Next year (May 2021 to April 2022), acceleration in high tide flooding and its impacts are expected to continue. Nationally, the likely median outlook is three to seven days. Regionally, the 2021 outlook is

By 2030, high tide flooding is likely to be about two to three times greater (seven to 15 days). Frequent high tide flooding will continue to accelerate—with major impacts to infrastructure and the economy—unless coastal flood mitigation strategies are implemented or enhanced.