Coral reefs are essential to healthy coasts and vibrant economies, playing a critical role in everything from protecting lives and property to supporting thousands of businesses.

Climate change is the biggest threat to the world’s coral reefs, causing mass bleaching, among other things.

The total economic value of coral reef services for the U.S.—including fisheries, tourism, and coastal protection—is over $3.4 billion each year.1 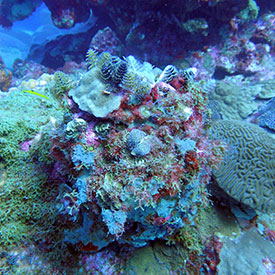 Worldwide, more than 500 million people depend on coral reefs for food, income, coastal protection, and more.2

Healthy coral reefs absorb 97 perfect of a wave’s energy, which buffers shorelines from currents, waves, and storms, helping to prevent loss of life and property damage. Coastlines protected by coral reefs are also more stable in terms of erosion than those without.4

Under the Endangered Species Act, 22 coral species are listed as threatened, and three are listed as endangered. The primary threats to coral reefs are climate change, pollution, and impacts from unsustainable fishing.5

About 25 percent of all marine species are found in, on, and around coral reefs, rivaling the biodiversity of tropical rainforests.6

The third global bleaching event, from 2014 to 2017, brought mass bleaching-level heat stress to more than 75 percent of global reefs; nearly 30 percent also suffered mortality level stress. This bleaching event was the longest, most widespread, and most destructive on record.7