State of the Climate

Fact source: State of the Climate, an authoritative annual summary that provides a detailed update on global climate indicators and notable weather events. These facts are for 2017 unless otherwise noted. This list is no way exhaustive—see the full report* for additional information.

The atmospheric concentration of carbon dioxide is now higher than has been observed on Earth for at least the last 800,000 years. 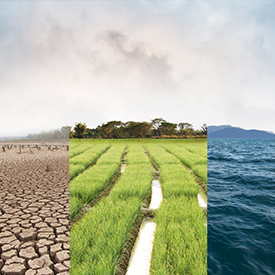 Global mean sea level during 2017 became the highest annual average since satellite measurements began (1993), rising to 77 millimeters—over three inches—above the 1993 average. This marks the sixth consecutive year (and 22nd out of the last 24) that it increased relative to the previous year.

Global land and ocean surface temperature are considered remarkably high, with limited areas experiencing near- to cooler-than-average conditions. Depending on the data set considered, the year ranked as the second or third highest since records began in the mid-to-late 1800s, at 0.38 to 0.48 degrees Celsius above the 1981 to 2010 average.

Preliminary data indicate that glaciers across the world continued to lose mass for the 38th consecutive year on record; the declines are remarkably consistent from region to region. Cumulatively since 1980, this loss is the equivalent of slicing 22 meters (over 72 feet) off the top of the average glacier.

The last three years have been the three highest annual values for sea surface temperature observed. 2017 sea surface temperature was 0.2 to 0.5 degrees Celsius higher than 2016 in the central-to-southwestern North Pacific, central South Pacific, eastern North Atlantic, Chukchi Sea of the Arctic, western Indian Ocean, and much of the Southern Ocean.

Global lake surface water temperatures were the second highest since 1995 (the earliest satellite data used), behind only 2016. Eight of the 10 warmest years for lake surface waters in the record have occurred since 2007 (1998 and 2001 rank fifth and ninth, respectively).

Extensive severe or extreme droughts affected all continents except North America during 2017.

Ongoing changes in sea level impact coastal communities by increasing the magnitude and frequency of sea level extremes that cause flooding and erosion. In many areas, coastal infrastructure is currently exposed to minor-impact flooding when water levels exceed a certain threshold. These thresholds vary geographically, but are expected to be exceeded, on average, three to four times per year.

*About the report: State of the Climate is an international, peer-reviewed report based on contributions from scientists from around the world. It is compiled by NOAA’s Center for Weather and Climate and published every year by the American Meteorological Society. This authoritative publication documents the status and trajectory of the world’s climate system and the contributors’ capacity and commitment to observe it.